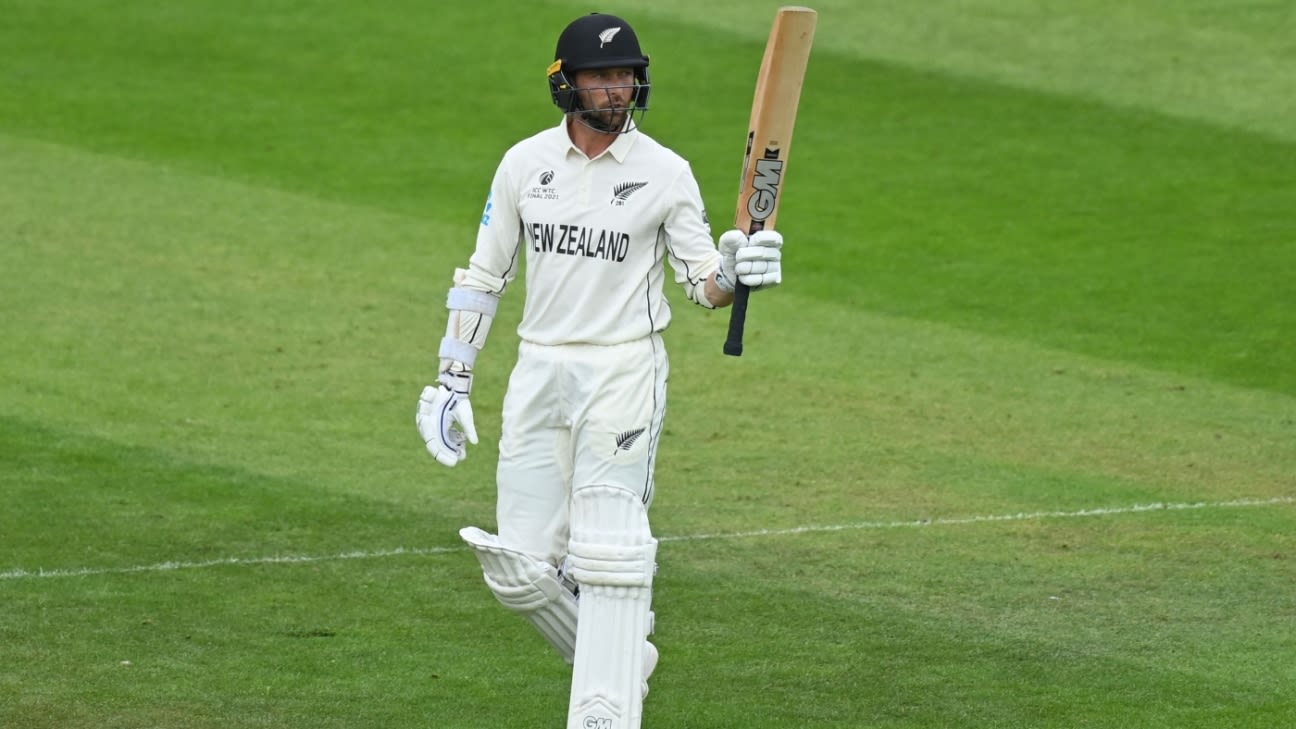 It took until 6pm on the third day at Southampton for the first fifty of the World Test Championship final to be posted, and not entirely surprisingly – even in a contest featuring a handful of the most iconic batters of the decade – it came from a player whose first appearance at this level came less than three weeks ago.

Some people spend most of their lives searching for their one true purpose. It speaks volumes for Devon Conway‘s character and self-belief, not to mention his intense skill as a batter, that he can come through a decade of itinerance in lower-league cricket – both in his native South Africa and, since, 2017 in Wellington – and discover that the one place where he truly feels at home is in a New Zealand Test team that has never been bettered in the country’s history.
His dismissal in the day’s final moments took the shine off New Zealand’s quietly dominant display, but in no way did it diminish the magnificence that had preceded it. Conway’s 54 was his third fifty-plus score in as many Test first innings, following his 200 on debut against England at Lord’s and a series-settling 80 in the second Test at Edgbaston, and though time is ticking by in a match that cannot quite catch a break, it guided his side through a fiendishly tough examination to maintain their ascendancy in a fascinatingly smouldering contest.
Conway’s 70-run stand with Tom Latham was New Zealand’s second fifty-run opening stand in three first innings on this Test tour – which, as an indication both of their levels of application but also of the innate trickery of English conditions, is already one more than England themselves have managed at home in the past three seasons. The pair had to ride their luck, not least against Mohammed Shami, whose current Test average in England is a travesty at 47.95, but they made it too with their diligent defence and a refusal to be hustled.

The WTC final is available in the US on ESPN+. Subscribe to ESPN+ and tune in to the match.

The current run-rate for this Test match, 2.25 an over, is the lowest in England since the turn of the Millennium, but such has been the challenge from two outstanding attacks, at no stage has that felt like anything other than a defiantly smart approach. Latham and Conway ground along at an even more sedate pace, barely a click above two by the time they were parted, and a long way removed from that now-anomalous opening gambit from India.
“They were superb,” Kyle Jamieson, New Zealand’s star with the ball, said. “From my short time in this team, it was some of the best batting that I’d seen. The ball was going to move around, we knew that, and the conditions were probably going to be in the bowlers’ favour. They’re two pretty world-class openers in my opinion, and the way they built a partnership, and got us to where we are, was pretty special.”

Batter error got the better of both men in the end – with Conway again falling to that flamboyant leg-side flick that had proven so productive on debut – but these have been conditions in which mistakes are inevitable, as India’s top-scorer, Ajinkya Rahane, proved in the tipping point of their innings, as he took on Neil Wagner’s short ball, and joined the cast of hundreds who’ve previously succumbed to his Route One methods.

The main man in New Zealand’s attack, however, was another over-achieving rookie – of a few more months’ standing than Conway, maybe, but every bit as much of a ready-made competitor. Jamieson’s outstanding figures of 5 for 31 in 22 overs included the day’s most unplayable moment, as he found his fullest length yet to India’s captain, Virat Kohli, and jagged a perfect nipbacker into his front pad to dispatch him without addition to his overnight 44.

Jamieson has now claimed a remarkable 44 wickets in eight Tests since February 2020, including five five-wicket hauls – and on this evidence, he could yet have a shot at pushing for 50 before this game is done – a mark that only Vernon Philander, in seven Tests, has reached more quickly in the modern era.

Jamieson’s extraordinary physical attributes, allied to a metronomically precise action that ensures each and every delivery is unleashed from a cloud-snagging 2m 30cm altitude, are the most fundamental reason for his success, of course. And yet, for both him and Conway to arrive so fully formed on the international stage – and with such vital points of difference too, even for a side rammed with all-time New Zealand greats – is a tribute too to an extraordinary and ego-less dressing-room, one that has been living its best life for the best part of a decade already.

“The team culture and the environment that has been created over a long period of time certainly is one of the strengths of this team,” Jamieson said. “You’ve got some world-class guys around, which allows you to settle into your role, and it’s been an absolute pleasure coming into this group and just being able learn off these guys, and ride the coat-tails of them a little bit, in terms of the pressure they build and the runs they score.”

Such have been the standards on display in the ICC’s optimistically (but not inaccurately) billed “Ultimate Test”, that the players on both teams have even set about demystifying two of the more entangled arts of the game. If ever you’ve wondered whether there was a significant difference between swing through the air and seam movement off the pitch, then the impact of the latter in this contest leaves little room for doubt.

“The ball certainly swung a fair amount, and probably at times almost too much,” Jamieson said “So for me personally today, and a little bit yesterday, I tried to more wobble the ball than swing it, and just engage guys for longer periods. Instead of guys playing and missing, they tend to grab the edge a little bit more.”

In terms of the match situation, another grim forecast for Monday – day four of a possible six – leaves little margin if New Zealand are to drive home their advantage. But Jamieson isn’t feeling rushed by circumstance just yet.

5 Ways To Reinvent Your Online Casino